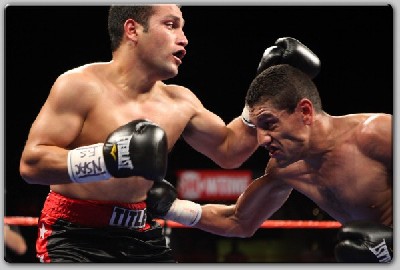 A poised and relaxed Hernandez controlled the entire scheduled 10-round welterweight fight, registering an early fourth round-knockout with a “cannonball blast,” right hand shot according to Showtime expert analyst Steve Farhood that all but ended the fight. “This was a sales job for Hernandez,” Farhood added later. “He’ll probably be in line for a title shot with Berto next."

“It was the right call,” said Showtime play-by-play man Curt Menefee of the stoppage at 1:38 in the fourth round. “You can see Anchodo not defending himself.”

In the co-feature, 2004 Cuban Olympian Luis Franco (7-0, 5 KOs) of Miami, Fla., registered a unanimous decision against Wilton “Pretty Warrior’’ Hilario (12-2-1, 9 KOs), of Saint Louis Park, Minn., by way of Santa Domingo, Dominican Republic, in an eight-round super featherweight bout. It was scored 80-71, 78-73 and 77-74. It was the first time Franco went past the fifth round as a professional.

“I knew it would go a lot of rounds because I saw tape and he’s not the best boxer but he’s a tough guy,” Franco said. “So I thought it might go the distance.”

It wasn’t pretty, but Franco got the job done against a game and offensive Hilario who Menefee at one point described the pesky fighter, “like a bug in the summertime. He just keeps following you.

“The bantamweight division is my favorite,” Farhood said. “What I love about this tournament is all these guys are fan favorites because they’ll fight anyone. Who’s going to be in the final? Who cares. This is an excellent tournament for this weight division and excellent for boxing fans everywhere.”

The tournament will begin with two semifinal bouts live on Showtime at 9 p.m. ET/PT (delayed on the west coast) from Leon , Mexico . Each bout will be scheduled for 12 rounds. The winners of each semifinal will clash in the final in 2011 with the losing fighters competing in a consolation fight.

Farhood then interviewed his fellow Showtime analyst Antonio Tarver, who announced he would be returning to the ring to fight in the heavyweight division after a year-and-a-half layoff.

Tarver (27-6, 19 KOs ) returns to the ring on ShoBox on Oct. 15. The former WBC and IBF light heavyweight champion will face Nagy Aguilera (16-4, 11-0 KOs ) in a 10-round heavyweight bout. “I just figured I walk around at 215 pounds, I’m a young 41 so why not?” Tarver said. “I feel like I still have something left to give to the boxing game and I want to become the next heavyweight champion.”

He added: “I’m eating properly and will have no stress of losing 25 pounds to make weight. I can fight harder and smarter and possibly become the next heavyweight champion of the world.”

The doubleheader was promoted by Gary Shaw Productions, LLC.

Showtime Sports will produce and distribute the fight, and utilize its own announcers. The PPV event will begin at 9 p.m. ET/PT. It is promoted by Golden Boy Promotions.