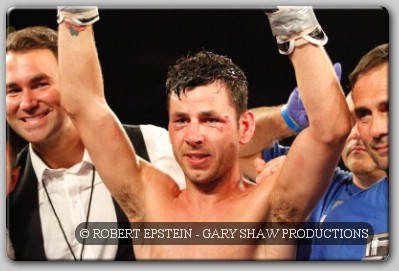 All week during the press build up to the fight, Barker had repeatedly stated this was his time and the Londoner certainly appeared as a man on a mission in the early rounds, surprising Geale with his aggressiveness.

Barker used his height and reach advantage to press in on Geale, who laid back and looked to catch the challenger in traps, occasionally nailing Barker with hard counters but the Englishman was taking the early rounds on aggression and work rate.

By the middle frames, Barker slowed down and Geale began to take more initiative, outboxing his rival with crafty shots, culminating in a ripping right hand to the solar plexus that the challenger never saw coming in the sixth round.

Things looked bad for Barker as he was down and struggling to breathe, but he found the will to regain his footing and beat the count. Geale tried to close the show but Barker avoided any further damage to produce a comeback by rounds’ end to shale the champion.

Barker became more careful in the seventh, taking less chances defensively that reduced the effectiveness of Geale’s approach. The champion was still catching Barker with the harder, more accurate punches but the challenger was busier for the remainder of the bout, outlanding the Tasmanian born “Real Deal”.

The closeness of the rounds made it difficult to determine a winner and the final scores off 114-113 for each fighter seemed right on target but the third mark of 116-111, which gave Barker the split decision victory, was questionable and that in itself should mandate a rematch between Barker and Geale.

Darren Barker wins the IBF middleweight crown in his first world title opportunity, raising his record to 26-1 (16), while Geale, 29-2 (15), loses the belt after five defenses and sees a eight bout win streak snapped.

There was another deposing on the undercard as former three-time European champion Kiko Martinez, 29-4 (21), took away the IBF super bantam belt from
Jhonatan Romero, 23-1 (12), in six rounds.

From the off, Spain’s Martinez launched a brutal assault on the much taller Colombian Romero, walking forward and winging hard shots that had the champion in trouble in the very first round.

Romero was the faster handed fighter and when he used movement, distance and initiative, outboxed the challenger in mid-ring exchanges. But Romero didn’t continue with this approach, instead getting bulled onto the ropes by Martinez, who’s approach exposed the poor defense of the champion with numerous eye-catching head shots.

As the rounds wore on, the damage started to accumulate on Romero, who was cut above both eyes and visibly fading. Martinez showed a lot of stamina to just keep going with the high pressure, high volume approach until he had the Colombian on very unsteady legs in the sixth, forcing a referee stoppage at 2:40 of the round.

Romero loses his title on his maiden defense while Martinez enjoys a complete career turnaround after losing the European title to Carl Frampton just six month ago.