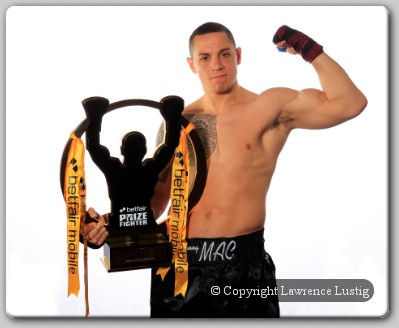 Danny McIntosh is hoping to propel himself to a British title shot in a new division as he steps up a weight to take his place Prizefighter Cruiserweights III at York Hall on Saturday, live on Sky Sports.

The former European light heavyweight champion Danny McIntosh is ready to bounce back from defeats to Eleider Alvarez, Tony Bellew and Eduard Gutknecht with success in Prizefighter and would be looking to fight Jon-Lewis Dickinson for the British cruiserweight title immediately, if he claims the £32,000 winner’s cheque this weekend.

“I am taking a step up in weight and why not? I think it is a great chance to get success in a different division and maybe push forward and get a British title.

“I would fit into the cruiserweight division near the top, that is simple. If and when I win this Prizefighter, I want a British title shot straight away. Jon Lewis Dickinson won Prizefighter and then went on to get a chance at the British title so let’s see two champions of Prizefighter take a chance and see who comes out on top.

“If good chances come along then I will certainly stay at cruiserweight, there will be no problem for me. I will see how I do in the competition. I think I have a good chance of winning it.

"I don’t really know a lot about the other guys. I have watched them on YouTube but we will have to see what happens, they are three-round fights so anything can happen.”

Danny McIntosh is joined in the tournament by Neil Dawson, Shane McPhilbin, Wadi Camacho, Hari Miles and unbeaten duo Conall Carmichael and Nathan Owens. Tony Conquest has been forced to withdraw through injury and has been replaced by Martyn Grainger (8-6).