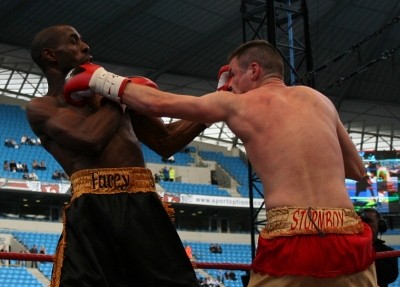 Facey was coming into the bout as the reigning English Champion and at age 36, had experienced his biggest fights over the last year and a half.

While the lean six footer had earlier in his career derailed the developments of such promising prospects Matthew Macklin, Gilbert Eastman and Matthew Tait but that phase of Facey’s CV was brutally put down by Jamie Moore in a failed British title bid in 2003.

Facey bounced back to win his next five but failed to defeat Bradley Pryce for the Commonwealth, however, was able to turn prospect killer again and put the first loss on Gary Woolcombe’s resume in January of 2007 to regain the English title first won against Macklin.

Most recently, a return bout with Moore for the British belt went far better for Facey than the first before the Sheffield man was stopped in the eleventh round.

Although nine years younger than Facey at 27, Thomas McDonagh had also turned professional in 1999 and went 29 bouts before a loss to Wayne Alexander in 2006 by split decision for the WBU title.

During his initial undefeated run, McDonagh, also six feet tall, posted wins over Bradley Pryce, Eugenio Monteiro and Marcus Portman. After the Alexander loss, McDonagh had won his last four to come into the Facey clash with an excellent career mark.

It’s amazing that these two hadn’t met in the ring before but that all was in the past with the clanging of the first bell.

Both fighters stood off from each other at first, as likely neither was used to seeing an opponent as tall as themselves, but McDonagh broke the ice by closing the distance and leaping in with a lunging shot that cracked Facey clean.

The English Champion took the shot well but was unable to get out of the way from a series of similar efforts from McDonagh early on in the bout as the defensive technique of pulling his head straight back from the punch wasn’t working against his long-armed rival.

But Facey began to come forward with the jab and right hands of his own and while not many efforts landed, it did have the result of preventing McDonagh from staging as many of the lunging right hands.

The action the commenced to be waged on closer terms with both men landing shorter shots amid and increasing degree of clenching. Sporadically, either man would be propelled back from the huddle from taking a hard shot.

The latter rounds saw Facey step it up against the winded McDonagh but soon both fighters were very tired and hanging on to each other all the time and very little going on in the way of offense. Neither fighter possesses a great deal of punching power and no one was ever seriously threatened by any punches landed during the bout.

The twelfth and final frame saw McDonagh stage a rally but he didn’t have the wind left to sustain anything against the always awkward Facey and the bell finally rang to end the bout.

The contest was declared a draw with Facey keeping his title and the Sheffield man showed good sportsmanship as he tried to comfort an obviously distraught McDonagh after the result was announced.