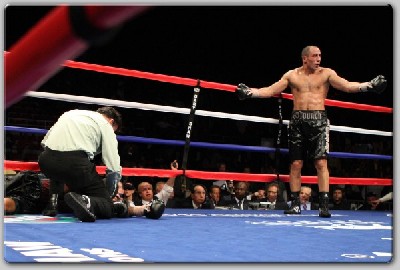 Andre Dirrell turned the Super Six World Boxing Classic upside down and handed previously undefeated Arthur Abraham his first loss on an 11th-round disqualification Saturday in a fight at the Joe Louis Arena during a Free Preview Weekend on Showtime that ended in bedlam with family, friends, officials and team members of both camps in the ring.

Referee Laurence Cole stopped a Group Stage 2 bout in which Dirrell (19-1, 13 KOs), of Flint, Mich., had performed magnificently at 1:13 of the 11th after Abraham (31-1, 25 KOs) connected with a sweeping right hand while Dirrell, who had slipped in Abraham’s corner, was down on one knee.

At the time of the disqualification, Dirrell was ahead by the scores of 98-91 and 97-92 twice. He was taken from the ring to the hospital for observation.

By winning, Dirrell became the fourth hometown fighter to triumph in as many tournament fights. He scored the bout’s lone knockdown in the fourth round, although Abraham, who was bleeding from the right eye, thought he had scored a knockdown in the tenth that the referee missed.

With the victory in the first of three Group Stage 2 fights, Dirrell earned his first two points in the tournament. Abraham remains the tournament leader with three points.

Until he was knocked unconscious from the late hit, Dirrell had boxed beautifully, switching effectively from orthodox to southpaw throughout. But Abraham, a notorious slow starter, was rallying. He said the foul was unintentional.

“He did not go down. I shouldn’t be DQ’d for this,’’ the favored Abraham told Showtime’s Jim Gray in the ring afterward. Later, at the post-fight press conference, Abraham added, “I was not looking at his feet. I was looking at his eyes.

“If you are a professional boxer, you look for every opportunity to knock out your opponent. You do not wait for him to recover. But I wish Andre Dirrell well and hope he is OK.’’