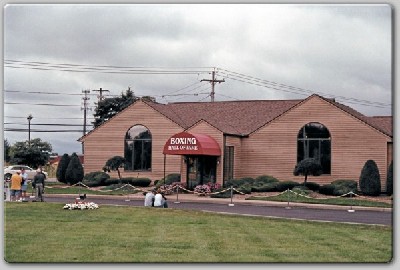 The 2010 Hall of Fame weekend in Canastota, NY has ended and as with previous ceremonies, excitement filled the air for both fighters, fans, honored guest and inductees.

While the weather for the event was less than desirable, not only hot but excessively humid, fans came in abundance to watch the sport pay tribute on its most anticipated non-fight card weekend.

On Thursday, June 10Th the gala started off with lectures from past inductees and current associates of the sport followed by book signings and the opening ceremony. Friday consisted of more ringside lectures, celebrity fist casting, open workouts by some of today biggest stars and hottest prospects.

The day's activities ended with Madison Square Garden night where the "Mecca" of boxing's greatest moments were relived by those who participated and witnessed the iconic buildings greatest moments.

Afterward, the attendees headed over to Graziano's famous Italian restaurant, mingling over drinks while swapping stories of what took place behind the scenes during their prime glory years.

As the day wound down, we gathered at the VIP cocktail reception then finished off with the Banquet of Champions which took place at the Syracuse Oncenter Complex. Honorees were dressed to the nines as they sat center stage and were toasted for their contributions to the sport.

Finally the weekend took close on Sunday the 13Th after a tribute by the US Postal Service, then Canastota's citizens lined the streets along with visitors to catch a glimpse of boxing's elite in the annual Parade of Champions led by Grand Marshalls Carmen Basilio and Billy Backus, the two local champions who inspired the hall's creation in 1990.

Local law enforcement, fire departments, high schools, state officials and even area congress participated in helping make our champions of the past feel welcomed and appreciated.

Closing ceremonies consisted of the inductees arriving on the platform to receive their Hall of Fame ring and deliver speeches to the fans about their feelings on being inductees, while sharing a moment or two of their storied careers.

This was a weekend fitting those who earned their way to immortality and a tribute to men of the sport who greatly deserved the honor.