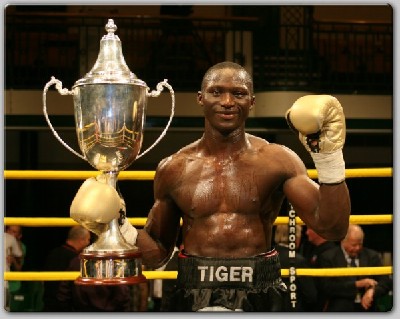 The nineteen-year old from Maidenhead entered the tournament as the youngest ever boxer to fight in the competition an wasted little time in making further history after he stopped Dudley’s Sam Horton after just one minute and 26 seconds into their fight – the quickest win in the competition’s 13 nights to date.

Mendy wasn’t finished there though and after holding off a spirited Daniel Cadman in the semi-final to gain a unanimous points win, he repeated that result in the final against Sheffield-based Northampton fighter Paul David to lift the trophy and pocket the £32,000 winner’s cheque.

“I said in every interview I gave before Prizefighter that I was going to win this and tonight I proved that I have what it takes to go on to do big, big things,” said Mendy. “This is a dream come true – to fight in front of a great crowd, in a great venue and lift an important trophy means so much to me.

“The next two years are going to be very busy for me because with the Prizefighter title next to my name the sky is the limit – I’m not afraid to take anyone on and I cannot wait.”

Mendy’s trainer Jim Evans described his latest protégé as “the best 19 year-old I’ve have seen since Errol Christie” before the fight, and is excited about the future of Mendy after his victory.

“I’ve been in the game for 66 years and he is potentially the best prospect I’ve had,” said Evans. “He’s very raw and has a long way to go but now he’s got a profile perhaps I can get some sponsorship or even a promotional deal for him and then I can groom him right.

“He’s so strong that you can take a chance with him against well-known fighters. Tonight he fought every fight different – and in my eyes he won every round of the night. Paul was the favourite in the final and he’s the older and bigger man but Patrick dictated the fight. He’s fearless.”

David was more than just the support act on the night though, with the 25 year-old delivering a devastating upper-cut to knock out Carl Drake in the final round of their quarter-final, then clinching a spot in the final with a unanimous points victory over unbeaten Welshman Jeff Evans before falling at the final hurdle to Mendy.

“It was his night tonight, he caught me with the better shots and he did well,” said David. “He clipped me in the right eye at the start of the first round and it took me the rest of the round to recover. But I stuck to my game plan all night and I’m happy with how I did, but it wasn’t to be for me.”

The latest of Barry Hearn’s eight-man, one night tournaments was played out in sweltering heat in east London, and the temperature rose further inside the venue after each bout.

After Mendy had stunned the audience with his lightning fast stoppage of Horton, pinning the Dudley fighter into the corner with a brutal onslaught that forced the referee into stopping the opening bout, it was Cadman’s turn to excite the crowd.

The Cheshunt cabbie faced Birmingham’s Eddie McIntosh for the right to meet Mendy and it was the all-action Cadman who gained the unanimous decision thanks to a strong third and final round where his pressure saw McIntosh take a count.

One corner of York Hall was taken up by vocal Welsh support for Evans, who had won the first three fights of his career in Newport. His first fight outside Wales came against Peter Fedorenko, the Sheffield man who made a victorious return from a ten-year absence from boxing in September.

The 32 year-old edged the opening round but his Pontypool opponent found his range in the second before holding off a charge at the start of the final round from Fedorenko which was crucial in claiming the split decision.

David impressed from the first bell in the final quarter-final with Drake, throwing some big rights and taking advantage of his significant height and reach advantages. Drake showed plenty of character in the second round to stay with the English champion, but again David gained control of the fight to leave his opponent with a bloodied nose and swollen right eye ahead of the final round.

David had outpunched Drake nearly three-to-one and the upper-cut that ended the fight was as powerful as anything seen in any previous Prizefighter, with the brave Drake getting to his feet after receiving medical attention.

Mendy and Cadman were the first to battle for a place in the final, with Cadman entering the ring with his left eye swollen from his opening encounter. Mendy looked keen to finish the job quickly again, roaring into action and troubling the 29 year-old, but he held on and responded with shots of his own to stay in the fight.

Cadman then turned the tables, thrusting forward at the start of the second round to rock Mendy and lift the York Hall crowd to its feet as he gave everything he had to the teen. Although rattled, Mendy maintained great composure for his age and a sharp left jab at the start of the final round saw the youngster take control. Again, Cadman rallied with a couple of right hooks but Mendy took the unanimous decision.

The teenager sat back and watched Evans and David slug it out for the honour to face him in the final, and as in his fight with Drake, the six-footer controlled proceedings against the Welshman, throwing the better punches with more regularity to outpunch his opponent once more en route to another unanimous decision.

The final was a cagey affair, with Mendy’s speed negating the benefit of David’s greater height and reach, and it was the “Tiger” who bore his claws with the better shots and busier approach to swing the judges in his direction for a record breaking result.