One of Great Britain’s most accomplished fighters gets the long awaited chance to step out of the domestic scene and into a hotly anticipated European title shot as light middleweight Jamie Moore meets highly seasoned Italian Michele Piccirillo on Friday, March 6 at Robin Park Arena in Wigan, England.

For 30 year old Moore, 30-3 (21), it’s the opportunity to put nearly two years of aborted challenges to former champion Zaurkbek Baysangurov in the past and thrust himself onto the world stage with a victory for the vacant Continental crown.

But the English southpaw isn’t being given an easy task by any means as Piccirillo, 50-4 (29), is one of the most experienced boxers on the planet at 154 pounds, having held the IBF title at welterweight and the European belt in two weight classes.

The still sharp 39 year old Italian has constructed a highly decorated resume since turning pro in 1992, racking up wins over the likes of Cory Spinks, Juan Martin Coggi, Frankie Randall, Rafael Pineda and Alessandro Duran while only losing over the last 13 years to Spinks, Ricardo Mayorga and Vernon Forrest in world title fights.

The man from Mudugno in southern Italy brings the advantage of having participated in nine world and European title clashes while Moore will be making his maiden voyage onto the European scene.

Moore clambered to the top of the UK light middleweights with stirring victories over Michael Jones, Gary Logan, David Walker, Andrew Facey and in particular, a shattering come from behind destruction of Matthew Macklin in 2006 for what could turn out to be the British Fight of the Decade.

The first Lonsdale Belt winner from Salford in over 100 years also proved his meddle over international competition with a dominating twelve round points verdict over two-time world welterweight title challenger Sebastian Andres Lujan in 2007 and added the Irish title to the British and Commonwealth belts already in the trophy cabinet with a third round stoppage of Ciaran Healy in Dublin last July.

Like Mayorga and Forrest, Moore is an aggressive, come forward fighter and must follow their lead in keeping Piccirillo on the defensive through constant attacks but only the best in the business have been able to pull that off against the iron-chinned Italian and this bout represents a chance for Moore to prove he belongs in their rarefied company.

Tickets, priced at £90 for VIP Ringside, £80 for Ringside and £35 General Admission are available by logging onto www.frankmaloney.com or by calling the Box Office at 0871 226 1508.

Sky Sports will televise the action live on SS2 starting at 10PM. 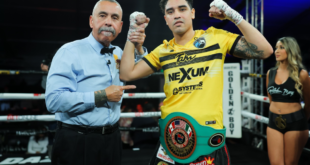