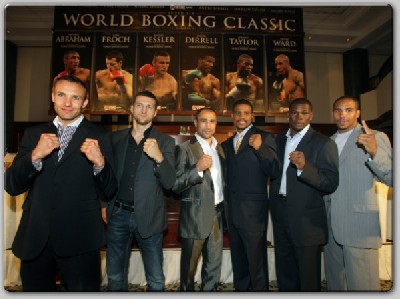 An exciting concept in the world of boxing kicks off tonight in Nottingham, England and Berlin, Germany.

Featured is a tournament comprising of six of the world's top super middleweights which will attempt to find out who the premier 168 pounder really is.

The fighters in the tournament are:

The tournament will be fought on a round robin basis; a mini World Cup, if you like. Each fighter will face each other with the winner gaining two points. A knockout will give an extra point. If there happens to be a draw, both men will earn a point. The four fighters with the highest points will progress to the semi-final knockout stage. Also, the WBA and WBC titles will be on the line.

Speaking of titles, WBA kingpin Mikkel Kessler commences his campaign against Andre Ward on 21 November. Tonight, however, sees the opening two matches of the tournament.

Everything understood so far? Okay, let's look at tonight's matches.

The 02 Arena in Berlin sees an exciting matchup when men who have each held middleweight titles clash.

Arthur Abraham from Armenia, though based in Germany, puts his unbeaten record on the line when he faces former undisputed champion Jermain Taylor.

Taylor is a man who has faced the bigger names. His resume includes matches against Bernard Hopkins, Ronald "Winky" Wright, Kelly Pavlik and Jeff Lacey.

Also, in April, Taylor came agonisingly close to dethroning Carl Froch in a WBC super middle title bid. After knocking Froch down in the third, he looked to be on the way to a points win before being dramatically stopped with only 14 seconds to go. This will be Taylor's first outing since that loss.

In Abraham, Taylor meets a man who is, although not known to the casual fan, teak tough. When Abraham defended his IBF middleweight title against Edison Miranda in September, 2006 he fought the majority of the fight with his jaw broken in two places.

While Taylor is the star man, Abraham is the boxer without a loss. After chasing a fight with Kelly Pavlik, now is his chance to shine. I also feel he is probably the worst opponent stylewise for Taylor.

Fighting in front of his home fans, I think Abraham will outlast Taylor and win a decision. I also think he could be the dark horse of the tournament.

On the same night in Nottingham, England, Carl Froch makes the second defence of his WBC title when he faces unbeaten Olympian Andre Dirrell.

Dirrell's pedigree is already well known, having bagged bronze in 2004, but he is yet to be seriously tested in his 18 wins as a pro.

In Froch, he meets a proud champion. After years of calling out Joe Calzaghe and winning British and Commonwealth titles, Froch finally netted the big one in an entertaining 12 rounder against Jean Pascal last December.

Froch's first WBC defence came in April against Taylor, when the Nottingham man's fighting heart came through again. After surviving a knockdown and behind on the scorecards, Froch battled his way to victory in the dying seconds.

Although Dirrell has 13 KO's in his 18 wins, I feel he will have to nail Froch to the floor to keep him there. Dirrell may well have his moments in this tournament, but I think Froch will keep his title over the 12 round course.