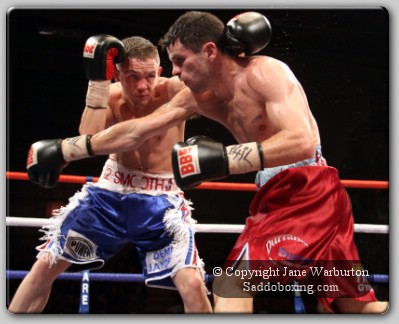 It was a close contest between "2Smooth" Booth and Matt Marsh on Friday night – with Marsh getting off to the better start and Booth sustaining a cut between the eyebrows mid-way through the opening round due to a clash of heads.

In the first minute of round five, Booth falls back to the canvas from a neat left to the upper body. He gestures that it was a slip but must take the count from Referee John Keane. Both men are warned to ‘watch the heads!’ as they work up close but now Marsh has sustained a cut to the right brow.

It continues to be a close fight but Booth has a better round eight and looks more settled. Both men slug it out in round nine – locking together as they work in close.

Sky Sports Statistics reveal that so far Booth has landed 112 punches while Marsh has landed 96.

As they begin the tenth round, Referee Keane gets the ringside doctor to check Marsh’s brow but he is allowed to continue. By the end of the round blood is pouring from the cut.

Both men tangle together at the start of the eleventh round and they almost fall through the ropes. Referee Keane calls time again to look at Marsh’s bloody brow and the contest is waved off.

Booth wins the Commonwealth title and also wins the Lonsdale Belt outright. He improves to 35 wins (15 by KO) 5 losses while Marsh drops to 13 wins (1 by KO) 2 losses (2 by KO).

Afterward, both men gave each other credit but Booth admitted he thought Marsh was ahead on points.

It was a quick nights work for ‘The Upsetter’ – Ovill McKenzie as he faced ‘The Peoples Poet’ – Billy Boyle. Prizefighter Champion McKenzie landed a heavy right to the face of Boyle inside the first minute of the opening round and Boyle falls to the canvas.

Half a minute later and a left to the face of Boyle puts the Sheffield man on the defensive while McKenzie looks for the knockout shot. Boyle keeps his gloves up high and McKenzie digs in a right to the body which Boyle clearly felt but remained standing.

An unsteady Boyle keeps upright but another big right inside the closing minute sees Referee Terry O’Connor wave the fight off – just as the towel is thrown from Boyle’s corner.

It was an action-packed contest between these two men from start to finish. Hammond had a good round three and as both men begin the fourth – they appear to be landing punches simultaneously. Round five and Hammond lands a punch then Concepcion lands a punch, back and forth – each man lands punches.

Round five and Hammond loosens up – letting go a barrage of shots. Sky Sports Stats reveal that so far Concepcion has landed 45 of 190 punches (23% success) while Hammond has landed 61 of 303 (20% success). Hammond continues to drive forward in round seven. “Work, Work!” shouts Carl Greaves from Hammond's corner.

Hammond is still commanding centre of ring in round eight and Greaves is still shouting “Work!” Both men look tired by the end of the ninth after throwing everything they’ve got. And the work-rate in the tenth and final round is unceasing with both men landing punches.

But Concepcion's hand is raised by Referee Shaun Messer at the end of the fight – much to the disgust of Carl Greaves and Team Hammond. Amidst a crescendo of boo’s – the decision is announced as a 97-96 points victory to the ‘Immaculate’ Concepcion.

Concepcion improves to 16 wins (10 by KO) 6 losses (4 by KO) and now goes forward to the next Prizefighter Series in three weeks time, while Hammond drops to 8 wins (4 by KO) 2 losses and 1 draw.

Miles put in another impressive performance to win by TKO round two. He improves to 8 wins (5 by KO) no losses, while Laight drops to 6 wins 72 losses (4 by KO) and 5 draws.

After almost a 2 year break from boxing - tough boxer Johanneson was looking for a decent win against durable Al Hamidi. The Leeds man kept focussed – although not looking as confident as we remember, but secured the points win.

Now under new trainer Jason Shinfield, Young Mutley gave an impressive performance against ‘The Gent’ Woolford who sustained a nasty cut above the brow.

Valentine wins on points to notch up his second victory while Clark drops to 1 win 5 losses and 2 draws.