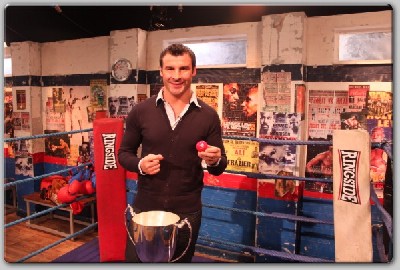 Welsh legend Joe Calzaghe performed the draw for Prizefighter International Heavyweights on Ringside on Sky Sports – as eight men with over 160 knockouts between them fight to become the first ever International Prizefighter Champion on May 7 at London’s Alexandra Palace.

The explosive Perez has won all of his 13 pro fights – 10 by knockout – and won the World Junior Amateur title at Light-Heavyweight before joining the pro ranks. Haye contacted promoters Matchroom Sport to recommend Oquendo, and the Hayemaker reckons the 38 year-old has the class and experience to claim the £32,000 winner’s cheque having mixed it with Evander Holyfield, John Ruiz, David Tua and Oliver McCall in his 39 fight career.

The winner of that bout will face a semi-final against Kevin ‘Kingpin’ Johnson, the American who took Vitali Klitschko the distance in a World title fight in December 2009, his only defeat in 25 fights or Gregory Tony, the French Heavyweight champion who fought for the European title in August.

Johnson fights outside America for only the second time, after losing to Klitschko in Switzerland, and Kingpin – with 10 KOs from 23 wins – is eager to win the tournament for a chance to get back into title contention. Tony is a live opponent for the American though, as the 32 year-old can really bang – he won his first seven fights inside three rounds and holds 12 KO wins from 14 victories.

UK Prizefighter champion Michael Sprott features in the third quarter-final against KO King Tye Fields, the 6ft 8in American with 41 knockouts from 45 wins. Sprott will be determined to win back-to-back Prizefighter tournaments after success in October and the Reading man is back in the venue where the European title was snatched from him by Audley Harrison’s 12th round knockout last April. Fields will be a major test for the 36 year-old and warned that he plans to get his fights over quickly – and he boasts an incredible 25 first round knockouts to his name.

The winner of Sprott and Fields’ will feature in the second semi-final and will take on either Cuba’s Juan Carlos Gomez or German Konstantin Airich. Gomez is the former WBC Cruiserweight and International Heavyweight champion with 49 wins from 52 fights in a colourful career that saw him defend his Cruiserweight title ten times before moving up to heavyweight defeat Oliver McCall for the International Heavyweight title and– troubling Vitali Klitschko when he challenged for his WBC belt two years ago, before falling in the seventh round.

Big hitting Kazakh-born Airich has 13 knockouts from 16 wins and has tasted defeat just twice – including a crazy fight with Danny Williams that put him firmly in the public eye.

Tickets for Prizefighter International Heavyweights at London’s Alexandra Palace on Saturday 7 May are available from Matchroom Sport priced £35 unreserved, £50 and £60 ringside and £120 VIP – to buy call Matchroom Sport on 01277 359900.