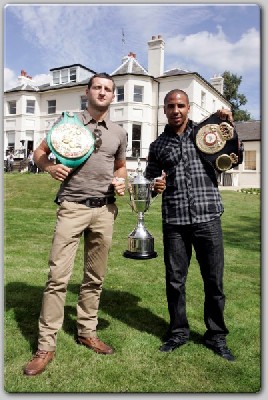 “This is what we as fighters dream of. It's what we fight for.
This one is for all the marbles.”
– Ward

“I am not worried about Ward. He has no power whatsoever.”
– Froch

Ward and Froch, along with their respective promoters Dan Goossen and Eddie Hearn, and Ken Hershman, Executive Vice President and General Manager, SHOWTIME Sports® and creator of the Super Six World Boxing Classic, spoke to the media at Matchroom Sport headquarters, a sprawling estate in Essex, just outside London.

Less than 10 weeks out from the culmination of the groundbreaking two-year tournament, Sky Sports, BBC, and a host of other sports and mainstream media gathered to see England's current No. 1 fighter face off against America’s last Olympic Gold Medalist in boxing and discuss their upcoming high stakes clash. Here’s what the men had to say:

Andre Ward
"This is my first time back in England since 2001 when I fought with the U.S. team against the U.K. I get quite a bit of fan mail from here so I know not every Brit is against me.

“This is what we, as fighters, dream of. It's what we fight for. This one is for all the marbles.

“When I started in this tournament everyone had questions about me. Everyone had doubts. Now, there are some people that say I'm the favorite, but I don't feel that way. I still have that chip on my shoulder.

“We know why we're here. I expected from the beginning to make it to The Final. And slowly but surely we made believers out of a lot of people that doubted me. But I would not call either one of us ‘great’, Carl nor I. That term is thrown around too loosely today. You have to earn that and that's what I want to do, to earn that name 'great.' This is the kind of fight you have to fight and win in order to be considered ‘great.’”

Carl Froch
“This has been a fantastic tournament by SHOWTIME Sports. Some have said that it has taken too long or that it’s been drawn out. But these fights that were made possible in the Super Six World Boxing Classic, with the six best guys out there, would not have happened had we not had the tournament.

“And The Final is what a top sport is all about; we have the two best fighters facing off for it all. That's what this tournament has delivered.

“I have set myself up for 10 solid weeks of training. I'm solely focused on claiming this hardware and bringing it back to England where it will remain for a long, long time.

“I owe a big thanks to Eddie Hearn. I feel as though there's been a weight lifted from my shoulders. He takes care of all the business and I am free to focus on the fight and prepare for Oct. 29.

“I have not been impressed with Andre and his level of opposition. Look at his record. He's fought good fighters but not at the level where we are now. The only opponent that is up there on his record is Mikkel Kessler. And I watched that fight. I didn't care for it, to be honest. I didn't like that Mikkel had to travel with his title only to have Andre throwing his head around in there, causing the cuts and such.

“On Oct. 29, as long as it’s a clean, fair fight I am not worried about Ward. He has no power whatsoever. And his hand speed, sure it’s fast, but even he'll tell you it’s not as fast as Andre Dirrell’s. And I handled Dirrell quite easily.”

Ward responded to these comments saying, “I've been in boxing for a long time, over 15 years; I know what he's doing. He has to do this in his mind, he has to minimize me. Minimize my accomplishments and performances. And that's ok. I understand. I'll just remind him that we have a date set. Oct. 29, that will come soon enough and we'll see.”

“When we began the Super Six World Boxing Classic in 2009, we never could have imagined all the ups and downs that this tournament would produce. We expected a wild ride and what a ride it has been.

“Carl Froch and Andre Ward are the two best boxers in the super middleweight division. Ranked No. 1 and 2, I don't think anyone disputes that; we have the right fighters in The Final.

“Whoever hoists the inaugural Super Six World Boxing Classic Cup in the end will have accomplished something unprecedented in this sport. We are very proud to be here.”

“This tournament has revolutionized the sport of boxing. It has taken out the politics of the sport that can hinder big fights and has left the best men in the division to square off.

“Through it all, we've ended up with the two best fighters set to compete in The Final.”

Dan Goossen of Goossen Tutor Promotions
“The box office at the historic Boardwalk Hall is set to put tickets on sale this Friday. I've spoken to the box office manager and he told me that the pre-sale response for this event has been terrific. He said it is reminiscent of the Arturo Gatti days. And for those of you that know Gatti and his accomplishments, for us to get that reaction in New Jersey this early on is a great sign.

“The Super Six World Boxing Classic is one of the most innovative things to ever happen in boxing. This Cup and the road to get to The Final has raised the level of awareness not only for these guys sitting up here, but for the sport itself. And I'm proud to be part of it.

“As we said earlier, we have the two right fighters in The Final: one from Europe and one from America. Each man brings his championship belt. And both men, sure they can do their talking at these events and in the buildup to the fight, but most importantly they bring it in the ring. There are too many fighters today that can talk a great game but they can't back it up. These guys can back it up and I can't wait to see this fight.”

The Super Six World Boxing Classic International Press Tour will continue on TOMORROW/Tuesday, Aug. 23, in New York at the Highline Ballroom at 11 a.m. ET with lunch following at Noon. Then the participants will travel to Oakland, Calif., with a press conference open to the public on Wednesday, Aug. 24, at Oakland City Hall Plaza beginning at 11:30 a.m. PT. Both U.S. press stops will stream live online at http://sports.sho.com. Full details for each event are below.