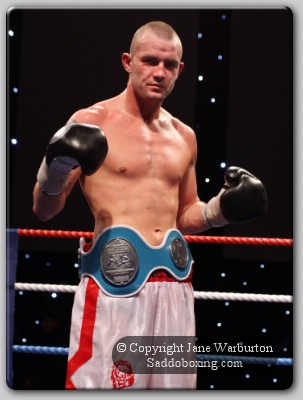 The Steve Wood Promoted Boxing afternoon began with a live screening of the Manchester ‘Derby’ before boxing commenced. Thankfully it didn't go in to extra time (although it looked like it might). Manchester United scored during Goal time in the closing minutes.

King hadn’t fought for more than two years and now faced Blackledge in a Title fight.

His feet seem ‘planted’ in round one with little movement but by the end of the frame he’d relaxed a bit. Blackledge felt a decent head-shot from King but the Welshman was slow in coming forward. Both men were warned to watch their heads in rounds three and four. King took a punch in the mid-torso and looked to sag slightly. He seemed to soak up a lot of shots while ‘waiting’. At the end of the seventh round he had a nick on the right eye.

Blackledge kept up a busy work-rate but King is tough and never really looked that fazed by the shots – calling Blackledge ‘on’ at times.

By the ninth, King’s corner urges their charge to up the work-rate but he just wasn’t busy enough. Blackledge wins on points 100-91 and takes home the Title. His record now stands at 12 wins (4 by KO) and 1 draw

Both men were landing with decent head-shots in this contest and Boulter had already sustained a bloody nose by the end of the first which worsened in round two. It was a sloppy round four with lots of holding.

This was Taylor’s second pro-fight although his debut was 18 months ago. He dominated from the start and Mitchell was on the canvas at the end of round two from a body-shot. Taylors body-shots were cringeworthy (!) Mitchell did well to come back with shots of his own. He looked like he might go down again at one point but stayed in the fight to give Taylor another victory on points.

Khan dominated the fight. Rafael was warned for holding in round one and despite being out-boxed – went the distance giving Khan a win on points 40-36

It was a messy opening round from these two with lots of grabbing by Griffiths who touched down and was given a count by Referee Steve Grey. Another untidy round two as both men gambol over and end up in a pile on the canvas! Danny ‘The Phantom’ looks frustrated. He does a bit of show-boating in round three which back-fires when he catches a shot from Griffiths.

Watson notches up his second pro-win on points 40-35 but Griffiths made it an uncomfortable win.

The bout was delayed while Kelly had his right glove changed in the ring.

Kelly ‘s nose is bloody in the second round despite him having most of the success and he piles in the body-shots round three. Jones steps it up in the final frame – having his best round of the contest.

Previous Marquez Crushes Pacquiao With Sixth Round KO
Next Pascal vs. Kuziemski December 14 In Montreal