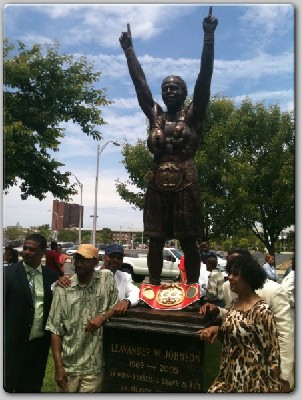 Among those in attendance with the Johnson family and friends, included Bernard Hopkins, Larry Hazzard, David Itskowitch, and Lou Dibella.

During the ceremony, both Hopkins and Hazzard encouraged children and everyone in attendance to look at the statue as a source of inspiration to not give up on dreams until they are achieved, citing Leavander’s tremendous determination and dedication to becoming a world champion.

“It’s an honor to pay tribute to the ‘Rocky’ of Atlantic City,” said Hanlon. “Leavander’s tenacious desire to be champion was truly inspiring.”

"We are very appreciative to all the support and cannot express how much this day means to us. This turnout today shows us that people of Atlantic City loved Leavander as much as he loved them.

"We are impressed and grateful to the likeness that Hanlon Sculpture Studio accomplished when sculpting Leavander. Thank you very much, and God Bless you all.”