INDIO, CA (June 21, 2022) – The Coachella Valley will turn up the heat this summer with another night of boxing when Golden Boy returns to Fantasy Springs Resort Casino on Thursday, July 28. The event is headlined by fan-favorite and undefeated fighter, Jousce “Tito” Gonzalez (12-0-1, 11 KOs) of Glendora, CA in a scheduled 8-round lightweight fight against Jose Angulo (14-2, 7 KOs) of Miami, FL. The Coachella Valley’s undefeated rising star, Manuel “Gucci Manny” Flores (12-0, 9 KOs) will be the co-main event of the night in a 8-round bantamweight bout against the experienced Daniel Moncada (15-6-2, 5 KOs) of Mexico City, MX. The rest of the undercard will be announced shortly. The night of boxing will stream live on DAZN and on the Golden Boy Boxing Youtube page hosted by Beto Duran and Boxing Hall of Famer, Bernard Hopkins starting at 6:00 p.m. PT / 9:00 p.m. ET.

Tickets for Golden Boy Fight Night on DAZN: Gonzalez vs. Angulo on July 28 are on sale Thursday, June 23 at 10:00 a.m. PT and are priced at $45, $35 and $25 plus applicable facility fees and service charges. Tickets are available at the Fantasy Springs Resort Casino box office, by calling 1-800-827-2946, or by purchasing online at www.fantasyspringsresort.com.

“I’m ready to get back in the ring and show everyone why I am ready for bigger fights,’ said Jousce Gonzalez. “I want the fast track to a world title!”

“I’m fighting for everyone coming out of the Coachella Valley,” said Manuel Flores. “Don’t ever let someone tell you that ‘can’t do it.’ You can do whatever it is you want to do as long as you believe in yourself. No matter where you come from, if you are going to be great no one is gonna stop that!”

Hailing from a proud boxing family, Jousce Gonzalez is an undefeated rising prospect in the lightweight division. A professional since 2016, the fearless Gonzalez has continuously faced tough opposition defeating experienced fighters like Jose Anotnio Martinez, Miguel Angle Mendoza and Gabriel Gutierrez to name a few. The 27-year-old was last seen in the ring on April 21st defeating the tough Jario Lopez via sixth round knock-out.

A native of the Coachella Valley, Manny Flores has only just fought once in his hometown after starting off his career in Mexicali, Mexico. Since then, the 23-year-old has steadily climbed the ranks of the division all while defeating veterans like Jonathan Rodriguez, Daniel Lozano and Leonardo Torres.. Flores was last seen at Fantasy Springs Resort Casino on April 21st with a spectacular third round knockout of Victor Ruiz.

Golden Boy Fight Night on DAZN: Gonzalez vs. Angulo on July 28th is presented by Golden Boy. The event was sponsored by Hennessy “Never Stop. Never Settle,” and “BetOnline – Your Online Sportsbook Experts.” The fight will take place on Thursday, July 28 at Fantasy Springs Resort Casino in Indio, CA, and will be streamed live worldwide on DAZN and the Golden Boy Boxing Youtube Channel. 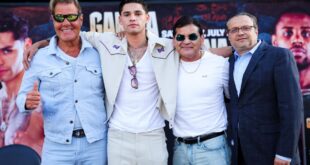 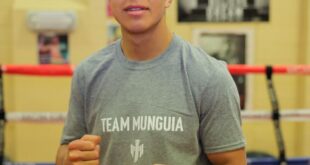