**With Slideshow and Audio** 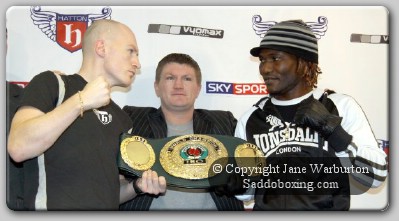 In a Hatton promoted fight night this Friday the 13th, Australian resident N’Duo will defend his IBO Welterweight title for the first time when he meet ‘Magic' Matthew Hatton, having defeated fellow native South African Phillip N'Dou in July for the vacant belt.

Listen to the audio of the press conference here:

Local boxer Lawton drops down in weight and faces Matthews of Liverpool in an eight round super featherweight contest.