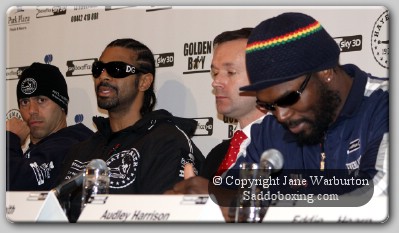 Today, at the Radisson Edwardian Hotel in the city of Manchester, England, media gathered for the official Press Conference ahead of the David Haye v Audley Harrison Heavyweight bout in which Haye defends his WBA Heavyweight Title for a second time.

The Champion - Haye of Bermondsey, London, faces Harrison who – though born in London – now resides in California, USA.

The fight - billed as ‘Best of Enemies’ - reiterates there’s clearly no love lost between Haye and Harrison and as questioning got under way – there developed a little ‘row’ between the two men (!)

Listen to the full audio here:

The much anticipated WBA Heavyweight Contest takes place on Saturday 13th November at the M.E.N Arena, Manchester and will be broadcast live on Sky Box Office.

Previous Andre Dirrell: Victim Of A Boxing Mis-hap Or Its Rumor Mill?
Next Gary Shaw Inducted Into New Jersey Boxing Hall Of Fame