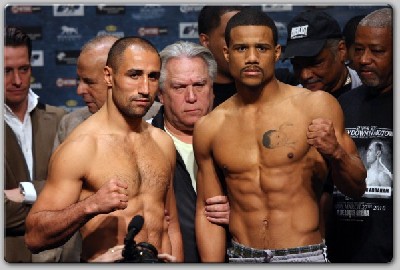 Arthur Abraham and Andre Dirrell squared off after their official weigh-in yesterday at the MGM Grand in Detroit for their Group Stage 2 bout in the Super Six World Boxing Classic tonight live on Showtime at 10:30 p.m. ET/PT, delayed on the West Coast, at the Joe Louis Arena.

The scheduled 12-rounder will be televised during a Free Preview Weekend on Showtime.

Abraham and Dirrell went face to face after a well-attended weigh-in, attended by none other than the legendary Detroit Hitman, Thomas Hearns.