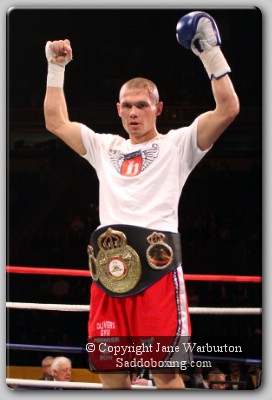 Murray got off to a steady start against Carvalho but it wasn’t long before he began to land his trademark body-shots. A neat left hook to the body in round four saw the Brazilian sink to his knees and was unable to make the count.

The win sees Murray notch up his twenty second win with no losses and it’s clear that the St.Helens boxer feels more than ready to land a big Title fight.

Jamie ‘The Nuisance’ Kavanagh extended his winning record when he outpointed experienced Razak. Dublin-born Kavanagh – who now resides in Los Angeles – improves to 6 wins (2 by KO).

Richard ‘The Inferno’ Towers forced a fourth round retirement of Belarusian Sukhaterin. Towers improves to 10 wins (8 by KO) no losses, while Sukhaterin drops to 7 wins (2 by KO) 17 losses (2 by KO).

Kid Galahad wins on points over Welshman Davies who sustained a cut to the left eyelid.
Galahad’s record stands at 6 wins (2 by KO), while Davies drops to 6 wins (1 by KO) 16 losses (9 by KO) and 1 draw

Little notched up his second pro-win when he faced Debutant - Cassius Connor.