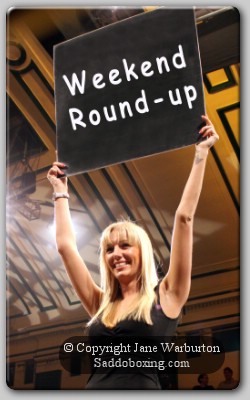 The Weekend was dominated by the Khan v McCloskey fight-night at Manchester’s MEN Arena, in which Khan retained his WBA Light Welterweight Title when a clash of heads and subsequent cut to McCloskey’s brow deemed Irish ‘Dudey’ unable to continue. The contest will be remembered for the angry back-flack following the decision. Khan now returns to the U.S. and it’s unlikely we’ll see him in the U.K. anytime soon.

Also on the ‘King Khan Return’s’ Bill, Manchester’s - Craig Watson suffered a fifth round KO at the hands of Lee ‘Lights Out’ Purdy. Watson was defending his British Welterweight Title for the first time.

In Spain on Friday (15th April), Jason ‘2 Smooth’ Booth of Nottingham failed in his bid for the vacant European Super-Bantamweight Title when he suffered a tenth round KO at the hands of Kiko Martinez of Alicante, Spain.

The Unification fight between Heavyweights - Wladimir Klitschko and David Haye has finally been confirmed. The highly anticipated mega-fight takes place at the Imtech Arena in Hamburg, Germany, on July 2nd.

And finally, we hear that Lightweight Champion - John Murray of Manchester will be facing Kevin Mitchell of Dagenham in the Summer. Promoted by Frank Warren – the date and venue of this Lightweight 'thriller' has yet to be arranged.