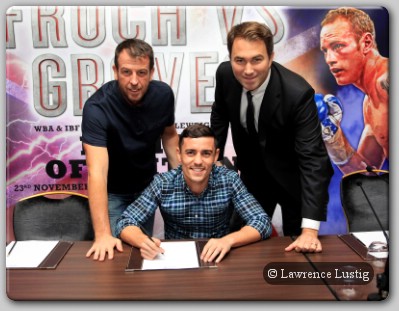 Eddie Hearn and Matchroom Sport are delighted to announce that Anthony Crolla has signed a promotional deal with the company and will feature on the undercard of Carl Froch’s blockbuster World Super-Middleweight title defence against George Groves on November 23 at the Phones4u Arena, Manchester, live on Sky Sports Box Office.

Crolla is riding high after his career-best performance in Bolton in June, beating Gavin Rees to claim the vacant WBO Inter-Continental title and catapult himself into World title reckoning.

“I’m delighted to join Eddie and Matchroom and I cannot wait for my first fight with them,” said Crolla. “Froch vs. Groves is a massive night and it’s great to be a part of it.

“I am right up there in the reckoning now and I know Eddie believes I am close to major fights – so it’s down to me to prove that, starting in Manchester on November 23.”

“Anthony is a fantastic addition to the Matchroom Boxing team,” said Hearn. “He’s a hugely popular figure in the North West and when you look at his recent run of fights, he’s always an entertaining addition to any card.

“His victory over former World champion Gavin Rees has propelled him to another level, and beyond the huge domestic opportunities lies a World title challenge for him in 2014. He will be part of the huge Froch vs. Groves show on November 23, with the opponent and undercard to be announced the week commencing September 30.”