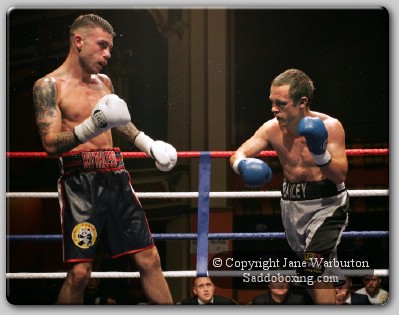 A thrilling contest saw Doyle sustain a nasty cut to the right eye in the fifth round from a clash of heads. He was stopped by Referee Phil Edwards midway through the tenth when he was seen to be taking too many shots.

The Steve Wood – VIP Boxing Promotions show featured ten undercard bouts and music from ‘The Beatles’ played throughout the evening to an enthusiastic crowd.

Debutant Kelly had a ‘messy’ first pro contest against Green and both men are ‘told off’ by Referee Phil Edwards two or three times for the amount of grappling. Referee Edwards scores it a Draw 38-38

No sign of ring rust on Davies – who hadn’t fought since February 2012 and now faced an opponent several pounds heavier. Solid punches from the St.Helens’ man but he was frustrated with Hussain who had a habit of holding on and was deducted a point for it in the fourth.

A ‘lazy’ first round for Ismail and the lack of work-rate during the fight saw McCauley literally waiting on the ropes for him to throw shots.

A good round two for Dube sees the Derby man get through with some solid shots.

Tonks wins on points 39-36 despite sustaining a nasty cut to the left brow in the third round. Carr was deducted one point for use of the head later that round.

Metcalfe wins by second round Knockdown