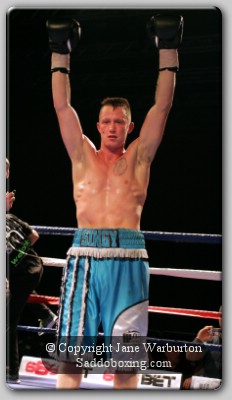 The main event saw Shayne Singleton of Colne add to his undefeated record by stopping Nodar Robakidze of Georgia in the seventh round of their scheduled eight round Welterweight Contest. Singy – who was originally set to fight Sam O’Maison for the Commonwealth Welterweight Title Eliminator last night – was too strong for stand-in opponent Robakidze who was taking too many shots in the seventh and was halted by Referee Mark Lyson.

Mitchell on the canvas in round 1and deducted 2 points in total for holding.

Debutant Bulger notches up his first pro win on points 40-35 but Hussain gets deducted a point for stamping his foot.

Previous Irish Bantam Prospect Burnett Back In Ring In Belfast
Next Zhakiyanov vs. Mundraby Moved To Queensland November 8