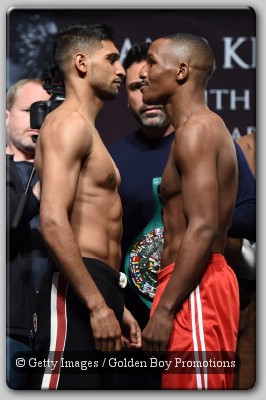 This evening features the unusual occurrence of two good fight cards taking place on the same night in the Boxing capital of America, Las Vegas.

Alexander is coming off a ten round victory over Jesus Soto-Karass in June after being outfought for the IBF strap by Shawn Porter a year ago while Khan has won three straight after losing a WBC/WBA title clash to Danny Garcia in 2012.

Khan seems to have the momentum here and if he has truly matured under new trainer Virgil Hunter, will stay away from a brawl against southpaw Alexander.

If Alexander can cut down the distance Khan will likely seek to maintain and hit the target, Khan could be drawn into an unprofitable slugfest.

This one is a classic boxer vs. puncher matchup as Thurman possesses genuinely crippling power while the 40 year old Bundu is a cagey veteran.

Thurman also has very good handspeed so Bundu must not only be able to take the Interim champion's punches but also put Thurman on the defensive, something no one has been able to accomplish thus far.

Light middleweights Jermall Charlo, 19-0 (15), and Lenny Bottai, 22-2 (9), square off in an IBF eliminator. Bottai is probably out of his depth here against Charlo, appears to have top level skills.

Bradley is definitely the more experienced man here as the former WBO/WBC light welter and WBO welter champ has faced and beaten a long list of top level opponents such as Manny Pacquiao, Juan Manuel Marquez, Devon Alexander, Ruslan Provodnikov and Lamont Peterson, although with some controversy, while only losing to Pacquiao in a rematch.

Chaves went ten rounds with Keith Thurman before being stopped earlier this year and was disqualified in a foul-fest against Brandon Rios in August. Aside from that he has faced only domestic level opponents in his native Argentina.

Expect Bradley to keep the heavy-handed Chaves at the end of his jab, using handspeed and good footwork to produce a points victory.

The Interim WBA light welter strap will be put at risk as cagey stylist Mauricio Herrera, 21-4 (7), continues his resurgence with a defense against the undefeated Jose Benavidez, 21-0 (15). With his greater experience and difficult to handle approach, Herrera should retain his title.

Middleweights Andy Lee, 33-2 (23), and Matt Korobov, 24-0 (14), face off for the vacant WBO crown on the undercard. Lee has faced the better opponents while Korobov is banking on his long experience as a highly decorated amateur.

Expect Korobov to try and keep Lee on the outside while Lee must get in close and make a fight of it if he is to hope to win the vacant title in a 50/50 contest.