Both men used a variety of punches throughout with Le Doux seemingly gaining confidence with each round. Jackson was sent to his knees in round six following a number of rights to the head and was only up just in time for the count. Boxing resumed but just seconds (and three shots later) Jackson was on the canvas a second time with Referee Shaun Messer waving the fight off while Jackson was on his knees.

‘Lethal’ Le Doux wins the vacant Midlands Area Super-Middleweight Title in 1 min 40 seconds of round 6 by TKO and improves to 6 wins with 1 loss.

It was a fast paced, all action contest so it was a shame that Warren suffered a nasty cut to the left eyelid at the end of round 4. The eye looked a mess but Referee Christopher Dean seemed unconcerned and fighting continued for the full six rounds. For me, it made for uncomfortable viewing. Scarff won on points 60-55

Popular Kaash Buttery of Burslem was quick-footed/handed as per usual and almost immediately was too much for opponent Dylan Draper (Braintree) whose legs were wobbly midway through the opening frame. Both boxers were warned for their conduct at the end of round 2 by Referee Kevin Parker. Draper sustained a cut to the mid-forehead in round 5 but Buttery settled for the 60-53 points win.

There was some nice boxing and a confident first pro-fight from debutant James Biddulph (of Biddulph) as he faced experienced Youssef Al Hamidi (Dewsbury via Syria). Biddulph gets off to a good start with a win on points 40-36

Other results as follows: 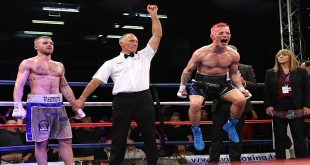 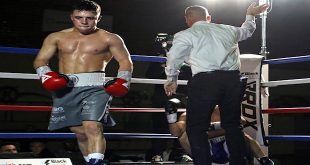