Marlen Esparza to Defend her Three World Titles for the First Time Against Mandatory Eva Guzman on Saturday, August 6, at Dickies Arena in Fort Worth, TX

MARLEN ESPARZA TO DEFEND HER THREE WORLD TITLES FOR THE FIRST TIME AGAINST MANDATORY EVA GUZMAN ON SATURDAY, AUGUST 6, AT DICKIES ARENA IN FORT WORTH, TX

ALSO ON THE DAZN CARD, MAURICE HOOKER VS. BLAIR COBBS AND BEKTEMIR MELIKUZIEV VS. SLADAN JANJANIN

Tickets for Ortiz Jr. vs. McKinson are on sale now and are priced at $275, $137.50, $82.50 and $44 not including applicable service charges. Tickets will be available for purchase online at Ticketmaster.com, DickiesArena.com and GoldenBoyPromotions.com

Also on the card and part of The Golden Boy Fight Night: Ortiz Jr. vs. McKinson Prelims on DAZN and the Golden Boy Boxing YouTube page, Alex “Chi Town Heat” Martin (17-4, 6 KOs) returns to the ring against the battle-tested warrior Henry “Hank” Lundy (31-10-1, 14 KOs). The 10-round super lightweight fight will be part of the preliminary bouts ahead of the DAZN broadcast hosted by Golden Fight Night’s Beto Duran and Texas rising boxing star Alex Rincon. Additional fights on the card will be announced shortly.

“I am ready for Eva Guzman. Mandatory defense or title fight, all fights are serious business for me!” said Marlen Esparza.

“This is the opportunity I have been waiting for to prove I am the best,” said Eva Guzman. “After this victory, the whole world will know I am the most dangerous fighter at 112lbs.”

“Im ready to show the world I’m still a warrior,” said Maurice Hooker. “I’m ready to give them a fight they will always remember.”

“Blair the Flair is saying absolutely nothing. See you August 6,” said Blair Cobbs.

“It’s been a long time in training camp, the opponents pulled out, the dates rescheduled, so I am happy to finally have a fight and step back in the ring on August 6 on a big Golden Boy show,” said Bektemir Melikuziev.

Marlen Esparza was born to make history in boxing. Born in Houston, Texas, Marlen Esparza began her boxing career at 12 years old after growing up in a household that loved the sport. In May 2012, Esparza became the first American woman to qualify to compete in the 2012 Olympics in London, the first year that women’s boxing made its debut as an Olympic event. She would win the bronze medal in the women’s flyweight division. In 2017, Esparza became the first female fighter signed by Golden Boy Promotions.

In 2021, Esparza had a successful year, with an unanimous decision victory against Ibeth Zamora Silva for the WBC Flyweight World Championship and successfully defended her new world championship title against former world champion Anabel “Avispa” Ortiz. On April 9, as part of the undercard of Ryan Garcia vs. Emmanuel Tagoe, Esparza faced her toughest challenge to date, taking on five-division world champion Naoko Fujioka. The fight pitted the #1 vs. #2 in the female flyweight division, granting them the honor of fighting for the first-ever Ring Magazine Female Flyweight World Championship. After 10-rounds of non-stop action from two of the mightiest female fighters in the flyweight division, the judges ruled in favor of Esparza unanimously, crowning her the new WBC, WBA, and Ring Magazine World Champion.

An accomplished fighter since her professional debut in 2015, Eva Guzman has rapidly risen the ranks to a world championship by defeating some of the toughest fighters in the division. Her first big test came in 2018 when she faced Yaditza Perez for the IBA World Minimumweight World Championship. In 2021, she earned the most significant accomplishment in her career thus far, moving up in weight and fighting in Mexico for the first time against Isabel Millan to claim the crown as the WBA’s newest Interim Flyweight World Champion. The new title had also earned her the honor of becoming the new mandatory to fight Marlen Esparza for the WBA Flyweight World Championship, something she has dreamed of becoming since her professional debut.

Ortiz Jr. vs. McKinson is a 12-round welterweight fight presented by Golden Boy in association with Matchroom Boxing. The event is sponsored by Hennessy “Never Stop. Never Settle” and “BetOnline – Your Online Sportsbook Experts.” The fight will take place on Saturday, August 6 at Dickies Arena in Fort Worth, TX, and will be streamed live worldwide on DAZN.

The post Marlen Esparza to Defend her Three World Titles for the First Time Against Mandatory Eva Guzman on Saturday, August 6, at Dickies Arena in Fort Worth, TX appeared first on Golden Boy Promotions.

Previous Is It Time For Vergil Ortiz To Get A World Title Shot?
Next ORTIZ JR. VS. MCKINSON FINAL PRESS CONFERENCE

Joseph Diaz Jr. & William Zepeda Set to Battle in Dangerous Crossroads Fight to be Amongst the Lightweight Division Elite 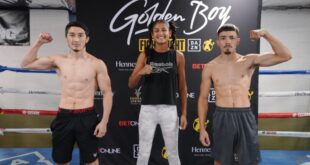 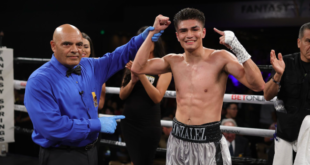 ROCKIN’ FIGHTS 43 ANNOUNCED FOR SATURDAY OCTOBER 1, 2022 AT THE PARAMOUNT