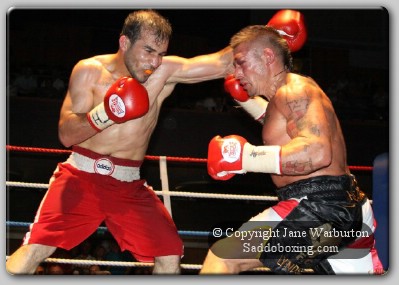 The headliner was Steve Saville's defence of the British Masters light welter title.

‘Bomber’ was expected to face Jon Baguley in a ten round contest - but a last minute change of opponent saw Youssef Al Hamidi step in.

Syrian born Al Hamidi had clearly come to ‘have a go’. He was the busier of the two men throughout the contest. Saville seemed content to ‘cover up’ while biding his time to land one of his trademark 'bombs’.

He does land a couple of those - the first coming midway through the second frame - a thumping left which earns excited cheers from the many Saville fans.

Round four sees the Dewsbury man on the canvas but he comes back from it - continuing to throw left and rights which, despite Saville's high guard, manage to sneak through the middle.

By round five, Sav’s left eye has started to swell. In the sixth - Al Hamidi is deducted a point for use of the head - small consolation to the Wolverhampton man who’s swollen eye is now a mess.

Team Saville implore their charge to use the jab and to target the body, but it seems he is still looking for that final ‘bomb’ and he teases Al Hamidi to ‘come on…come on in…’ He runs out of time and the wished-for final bomb doesn’t come.

Moscow born Angel ‘The Artist’ McKenzie has recently become quite well known for her ‘spell’ in the Big Brother House. Usually very upbeat - she was surprisingly ‘quiet’ as she entered the ring wearing a woolly hat bearing the Union Jack.

She smiled as she made her ring walk to the sounds of...herself! The music was apparently Angel singing her own song.

A ‘glittering’ Scragg almost sprinted up to the ring - clearly fired up for this fight, but she seemed to struggle to settle in.

Southpaw McKenzie boxes like she has lead weights in her gloves! But, she gave a good contest against Scragg who seemed ‘frustrated’ in there.

Scragg pressures McKenzie in the third round and the crowd cheer their support.

McKenzie manages to slip shots through the guard of the Wednesbury woman, who takes a number of punches to the head during the fight. It gets a bit sloppy in the latter rounds but Scragg scores with the left to the head and - keeping up the work-rate -secures the points win 79-75.

She improves to 10 wins (3 by KO) and 1 loss, while the record of McKenzie, who didn’t wait around for the official announcement, now stands at 3 wins and 16 losses (2 by KO).

This was only Trumans’ second outing. But - for me - he was impressive. Using a variety of shots throughout - he seemed to be listening intently to his corner and following instructions.

He dominated the first round targeting the body of Dyer. He made some nice moves - dodging to the side in almost Hatton-style. And by the end of the second frame - Welshman Dyer was marked under the left eye.

At one point - the two men got in to a bit of a ‘spat’ - goading each other, and in the third round Dyer is given a final warning for holding and for hitting back of head.

When he does get a shot in - Dyer's punches seem powerful, but the Trumanator continues to work at the body and throws some decent uppercuts to get a well deserved points win.

Truman improves to 2 wins and no losses while Dyer's record now stands at no wins and 12 losses (1 by KO).

Wilkes landed some big body-shots and uppercuts. And though experienced Scriven does land with a few decent head-shots - Wilkes is the busier.

The Strutthammer looked in fantastic physical shape as he prepared to almost ‘dash’ out of his corner! Obviously fired up for this contest - within seconds he was told to ‘calm down‘ by referee Nigel Gill.

But seconds later, Jones was down on the canvas. He takes the count but goes down again and is then stopped by referee Gill inside the first round.

There was big support for Mohican-haired Holder, while Welshman Brophy looked relaxed and happy to show off his latest tattoo before getting down to work.

A hard fought contest which sees Holder get the points win. Holder's record now stands at 3 wins and no losses, while Brophy drops to 3 wins and 35 losses.