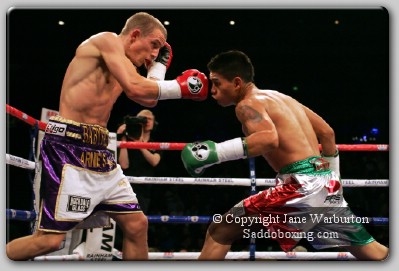 Mathews wins the WBA Continental Lightweight Title by Unanimous Points 118-108; 120-106; 119-107. After finding himself on the canvas a couple of times in round 2 – gutsy Dingsdale did well to go the distance and provide Mathews with a few problems along the way.

‘Beefy’ Smith landed body-shots to score a third round TKO, but also sustained a nasty cut to the right eye which he was most worried about after the fight ended.

‘Baby Faced Assassin’ Butler was in great form against the tough Mexican, winning on points 100-91

‘The Captain’ Stalker got off to a bad start when he found himself on the canvas in round one and two – but with a non-existent guard he couldn’t escape Catterall’s head-shots which landed continuously. Stalker’s face was marked-up but Catterall suffered a cut to the corner of the right eye which also swelled-up in the mid-rounds. He was in danger of getting stopped because of the cut – so he upped the ante and Stalker was halted by Referee Mark Lyson in the eighth.

Eubank, with characterful father - Chris Eubank Senior at close hand, wins by second round TKO and now goes on to face Billy Joe Saunders for the EBU European Middleweight Title on the 29 November.

Williams wins by second round KO

Dickens wins by second round TKO

Fagan suffered his first defeat on points to Podusovs 57-58

Gomez jnr, watched by sombrero-wearing father - Michael Gomez ringside, was in playful mood and was told to focus by his team. Granted – it was by this time the early hours of the morning and they were already dismantling some parts of the arena, so the last three fights of the night had had a long wait. Gomez gets the points win 40-36 to notch up his second win of two.

Previous Martin Murray Next Up In Gennady Golovkin Firing Line
Next Coyle, Campbell Stay On Course For Big Summer Showdown