**With Slideshow and Audio Interview Stream** 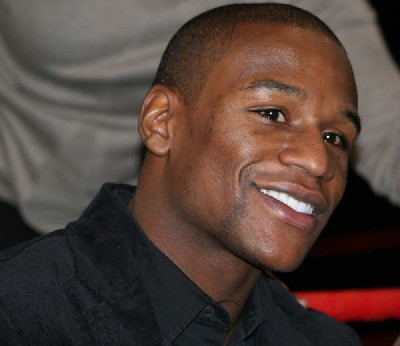 Saddoboxing.com was in attendance as five division world champion "Pretty Boy" Floyd Mayweather addresses members of the media at the MGM Grand Garden Arena where he will face Ricky "The Hitman" Hatton this coming Saturday night in "UNDEFEATED!" for the WBC and Ring Magazine welterweight championship live on HBO Pay-Per-View.

FM: I Love my job……I don’t hate anybody…my mother taught me not to hate anybody….this is my job, my job is to go out there and box.

FM: He makes a lot of mistakes

FM manager: How many fights has he sold out here in the U.S ?

British Press: Ricky clearly ‘wants’ this badly…how important do you think ‘desire’ will be ?

FM: One thing about ya is you have ‘die-hard’ fight-fans and I respect your fight-fans, I love you guys and when Ricky Hatton get his ass beat I’m still gonna love ya….I wish we had fans like that!
(Hasn’t answered the question so it’s repeated…..)
Well I guess he really want to hurt me….I don’t worry about that, man (laughing..) I don’t worry about anything. I’ve been here that many times before. You want to know how he’ll come out? He’ll come out ready to kill me.

British Press: Floyd as you said you wanted the fight, after he sort of insulted you in the ring, what do you care if Ricky Hatton insults you?

FM: Hey and UK - you think hitting and holding/ wrestling is exciting then I guess he’s an exciting fighter…I’m not worried about what he says…you never heard me say that. He just hasn’t put in the time, dedication and work in to the sport of boxing like I have, I gave this sport my whole life and fighters are going to respect me and if they really don’t respect me I’m going to beat it in to them. I’m not really worried about anything I’m just gonna be ‘me’ - I’ve been here so many times. He’s 43 and 0 but look who he fought - a bunch of them have been over the hill

FM Mgr: And guess where 37 of them have been? In England!

British Press: How many of your 38 have been in the States?

British Press: Twice you came out of retirement? What was they about?
(Someone said “Money?”)

FM: It ain’t about money, man - you know I got a lot of money……”Money-Mayweather”. Er….let me see…….er………since I always wanted to fight over in the UK and never did that why don’t I bring him over here and do it one more time - that ain’t so bad is it?

British Press: What does the future hold after this?

FM: A long vacation! I’m gonna take a long vacation! Spend a lot of time with my kids and helping other kids that are less fortunate and give back to my community to public schools and continue with my professional businesses outside of boxing and continue to be just a smart and shrewd business man - with my Team that’s Team Mayweather, Ellerby Enterprises, Al Hemmy, Kelly Swanson. Boxing is cool - it’s been great to me.

British Press: On publicity footage we’ve seen leading up to the fight - you and Hatton are portrayed as sort of opposites…….Ricky as the down-to-earth man of the people and you’re the flash-harry who throws money around. Is that a fair characterisation?

FM: Have you judged me on what you see on the TV or by hearsay or do you want a chance to get to see the real Floyd Mayweather?

They don’t talk about the things I do for families who are less fortunate - they don’t talk about that do they? So I mean…sometimes people portray you the way they want to portray you. The pen and the mouth is a strong weapon. I know who I am as a strong person. Like on that 24/7 - I know if I can afford 10 cars - I can buy 10 cars. Does a guy that fights a guy that has only 1 car - does that say that I’m better than him because he only has 1 car? No not at all. I live my life how I want to live it. And he lives his life how he want to live it - if he wants to buy 1 car it’s up to him, if he wants to drink beer till dusk - that’s his life, my life is a little bit different. We live our life 2 different ways - that doesn’t mean that one is better than the other…not at all. I feel that everybody is equal, everybody in this room is equal and I live my life the the way I live my life.

British Press: Are we right Floyd in thinking that you like to play the cartoon-badboy?

FM: Everybody in sport has their own, but I feel like I ‘stick-out’ different. If you put a lot of fighters in the ring right now - a lot of champions - the one that would stick-out the most would be Floyd Mayweather. They gonna say Floyd Mayweather is one of a kind because he can win under any conditions, no matter what, no matter who’s turf he’s on, no matter what the media say - the writers say, “He fights through anything and that’s what I do - I fight through everything.

British Press: Are you quite impressed though with his (Hattons) spirit - he doesn’t seem intimidated does he? Do you admire him for that?

FM: Have you ever known Hatton to be a trash-talker?

FM: Ok but now he’s trash-talking this fight. In the States we call guys that talk trash on camera, ‘Camera-thugs’ - he’s a camera-thug - he only talk trash when he’s on camera. I talk it in his face. You know I’d say it to your face - I don’t say it to your back.

British Press: He does say it to your face though doesn’t he?

FM Manager: ….He’s got all his mates there….

British Press: Does it bother you at all that you don’t get enough public recognition for all the good things you say you do?

FM: The main / good writers - they write a few things. You live and learn and only the strong survive.
He’s gonna come out and he’s gonna fight his heart out - I’m gonna be smart - I’ve been around this game a long time. This kid has got a weakness and come the fight - I’m gonna show you this real bad weakness.

British Press: What is it? Is it because he’s open / too easy to hit?

FM: Not even that. He gonna be easy to hit anyway.

US Press: Are you happy to see Joe Cortez being referee for this fight?

FM: Joe Cortez is one hell of a ref - a good ref, he’s fair but he’s firm. It’s like any other fight man, I’m not worried about these guys, it‘s nothing. I’ll train, go home, sit down bet on my daily sports every day - basketball, doing my regular thing. When the fight get here - it’s ok I don’t worry.

British Press: How do you see the fight going?

FM: He gonna come on quite hard - cos he’s upset. He makes a lot of mistakes. No, it won’t go to twelve.

British Press: Have you ever had self-doubt?

FM: Self-doubt, what’s that? How did Ricky Hatton do in the amateurs?

Press: about the same as you 4 or 5 defeats. Didn’t you have self-doubt after the amateur defeats?

FM: I’m just me, man, live life, happy, my grandmother over there - as long as she’s happy. I put my family in one hell of a predicament. I fought my way from the bottom to the top - Ricky Hatton hasn’t ever seen his father being shot, I don’t think Ricky Hattons mother has ever been on drugs, I don’t think his father’s ever been in prison or lived in a neighbourhood where people dying is normal - I don’t think he lives that type of life. I think because I lived that kind of life and fought my way to the top - I feel that is an accomplishment and just because I truly believe in myself when nobody else believed in myself when nobody else believed in me - I don’t think that’s ‘cocky’ I just think that’s super-confident. When everyone was doubting me saying ‘he’s not gonna do this he’s not gonna do that, you’re putting this kid in too early to fight for the title - I kept proving them wrong. I kept fighting the people they put in front of me - I never cried, never complained………….I mean of course, you’re always gonna love somebody because they come from your country - this is logical, say the US soccer team was to play the Brazilian soccer team of course I would want the US Team to win, but what do I think? I think the Brazilian team will win but I want the US Team to win. So you (British) want him to win - you’re gonna watch the fight and cheer and you’ll want to go out after the fight and drink Guiness Beer and have a ball - well you’ll still be able to do that - it’s just that he’s gonna come up a bit ‘short’ on this one -that’s how the game is played.

Re: Guiness - I hear it’s very nice - I never tasted it!
I’m just happy, I’m in a great position - house paid for, cars paid for, 8-figure sum in the bank, I’m in a win-win situation. I’m in great spirits.

British Press: What turns you on other than boxing?

FM: Oh man…..I’m not a fan of boxing, not at all, I’m a fan of basketball and football. When the fight gets here it gets here. I got my Christmas tree up today, tomorrow I might get some presents for under the tree.

I go to the gym and work hard, I’m not beating a body-suit up (makes loud grunting noises to imitate Hatton when he’s throwing punches at the body-bag) I box world champions. We’ll see.

Ian Darke: If you have 8-figures in the bank - what keeps you boxing then?

FM: I always wanted to come over to the UK to fight. If I can’t go to the UK - I’ll bring the UK over to me.

British Press: So his fans out here will lift you then?

FM: No, every fan that is at the fight - is over here to get a bit of the Floyd Mayweather experience - they are boxing fans. He never had this many fans come over here before.

FM Mgr: The British Fans have had unlimited access to his tickets before.

Press: Is your mother going to be at the fight?

FM: Yeah,yeah….she gonna sit back there with a big rock on her hand sit back and relax, but you know my mother is a very respectful lady. And I respect his mother - I never disrespect anybody, but you know when you watch that 24/7 what she (Carol) really wanted to say was tat she wanted her son to kill me - that’s what she really wanted to say, but her husband stopped her (I’m smart and I see these things). But guess what I say - I take my hat off to his father and his mother - nothing but respect, I respect his parents - that’s how I am. My mother would never say anything bad about him (Ricky). She (Carol) must realise that I’m putting her son in the position of getting the biggest payday of his career. I’m putting him in a position to buy a lot of pubs and he can buy ‘stock’ in Guiness ! (Laughing)

Hear the full audio stream of Floyd Mayweather as he talked to the press Below...