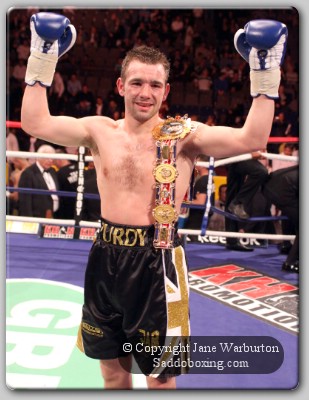 Watson of Manchester faced Lee ‘Lights Out’ Purdy of Colchester. This was Watson’s first defence of the title he won in February when he out-pointed John O’Donnell.

A steady opening round sees Southpaw Watson confidently throwing shots and doing his usual ‘walk-off’ while Purdy kept a high guard and looked to be patiently ‘weighing-up’ his opponent. The Colchester man seems to be ‘waiting’ for a gap and it comes soon enough as he clips Watson with a right hook to the face mid-way through the opener. The shot rocks back the head of Watson and he has already sustained what looks like a graze below the right eye.

Round two and Purdy just misses a couple of times with swinging punches as Watson neatly dodges the shots. Purdy keeps centre of ring – keeping Watson on the back-foot.

Round three and Watson gets in with a right as he’s backed up in the corner. He gives a little smile of self-congratulation as if to say ‘yeah – have some of that!’

Purdy seems to be stalking Watson as they begin the fourth, maybe he’s looking to land a big right (?) Watson is the busier of the two men but Purdy picks up the pace in the final minute of the round – pressuring Watson and landing clubbing lefts and rights to the head. “Great round, Lee, Great round!” his corner shouts.

With just half a minute of the fifth round gone – Purdy finally gets to land his trademark right, bang on the chin. Watson goes down but immediately gets to his feet again – clearly dazed and confused. Referee Phil Edwards waves a halt to the contest – Watson in no condition to continue and Team Purdy celebrates. A visibly emotional Lee Purdy (aptly named – ‘Lights Out’ !) wins the British Welterweight Title by fifth round TKO.

Previous Weekend Round Up
Next Ringside Report: Rendall Munroe Vs Andrei Isaeu