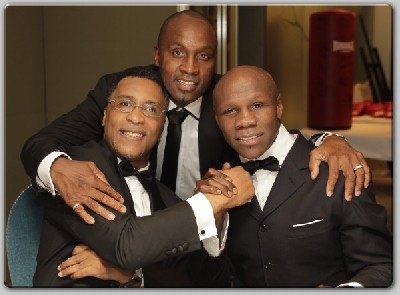 The cream of British boxing gathered at the Dorchester hotel in London on Tuesday night (20 September) for a charity dinner in honour of Michael Watson.

Twenty years ago, Watson fought Chris Eubank at White Hart Lane for the WBO super middleweight title. Eubank won the fight in the final round, but for Watson, the real battle was only just beginning for Michael after he collapsed in the ring and fell into a coma.

Watson’s incredible story took him from that coma to completing the 2003 London Marathon and receiving an MBE the following year and on Tuesday, the accolades for this real life superhero continued as the WBO recognised him with a special belt: the WBO People’s Champion of the World, an honour that Watson accepted with his typical quick wit.

“At last, justice is done,” said Watson, holding the belt aloft to the acclaim of one of many standing ovations he received from the mix of fans and fighting legends. “I want to thank everyone who has been such a great help to me throughout my life. Life is a gift and I'm so happy to be able to share this special evening with so many friends.”

Among those friends and family were two of Watson’s fighting foes Nigel Benn and Chris Eubank, who escorted the guest of honour into the packed ballroom after a parade of fighting greats including John Conteh, Joe Calzaghe, Duke McKenzie, Spencer Oliver and Johnny Nelson. Sky Sports’ Adam Smith chaired proceedings and interviewed Eubank and Benn about their fights with Watson.

“Michael was such a gentleman before the fight – he was so calm, almost like Yoda and for 11 rounds he dealt me a bitterly emotional beating,” said Eubank. “It is a fight that really should be celebrated – it was his greatest performance and it was the greatest fight I was ever in and so much more has happened out of the contest that has made boxing a safer sport – it’s all down to Michael and we all owe him a great debt.”

“Could I have gone through what Michael has been through? I don’t think so, no,” said Benn. “He is a true one-off, but he was always a magnificent man – a true gentleman and an inspiration. I will never forget how he beat me in our fight, he beat me so badly that night I just couldn’t live with him, but he was the first person to hug me and that was a mark of the man. He’s a friend for life.”

Those in attendance were fortunate enough to watch the premiere showing of Michael Watson: The People’s Champion, a documentary produced by Matchroom Sport on Michael’s extraordinary life which was on Sky Sports 3 and HD3 Thursday at 7pm.

The gripping hour of television featured contributions from boxers like Benn, Eubank, Barry McGuigan and Spencer Oliver, but also from Peter Hamlyn, the neurosurgeon who tended to Michael, Leonard Ballack, Michael’s close friend and carer, Michael’s mother, Joan, and of course, Michael himself.

“The programme is a fitting tribute to a wonderful man,” said Barry Hearn, who organised the event at The Dorchester. “It’s a real treat for boxing fans and sports fans, but Michael’s story transcends sport and touches people from all walks of life – it is compelling viewing and I urge people to tune in.”

A charity auction raised considerable funds for Watson, with boxing memorabilia kindly donated and signed from those in attendance and also from mega stars like Mike Tyson, Lennox Lewis and the Klitschko’s, while Michael’s beloved football club Arsenal and their north London rivals Tottenham Hotspur also donated special items.