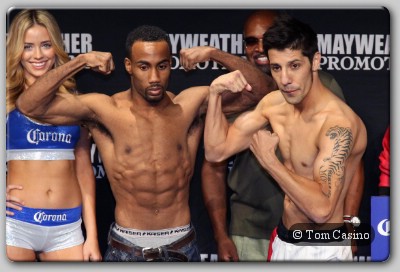 The four boxers who will fight on ShoBox: The New Generation tomorrow, Friday, July 19, live on Showtime at 10 p.m. ET/PT, delayed on the West Coast, from The Joint At Hard Rock Hotel & Casino in Las Vegas are set to go following Thursday’s official weigh-in. All made the weight on their first attempts.

What the ShoBox fighters said Thursday:

“We all know what Molina is going to do. He is going to come at me and try and land his money punch, the right hand. Well, I’ve got power, too.

“I feel like I’m a young 30 years old. In fact, I feel better now than I did when I was 23. I’ve never really taken a lot of punishment. I never go into a fight with a game plan. I just adapt, see what makes my opponent feel uncomfortable and go from there.

“I’ve only fought three rounds in the last 20 months or so but I’m in the gym every day. Training camp went great. I spar five-minute rounds. For sure, my conditioning is fine and will not be a factor.’’

“I’m glad to be back with my trainer, Joe Goossen. We work well together and we’ve had a lot of good wins together. I had a tremendous camp with tremendous sparring. I’m in great shape, totally ready and absolutely confident. I’ve got that sense of urgency back, and you’ll see that for yourself on Friday.

“I’m excited. It is going to be a hell of a fight. There’s no secret I’m going to try and make this a physical fight and go right after him. Bey is a very quick, athletic boxer. But I’m not going to let him breathe. I don’t plan on it going to the judges.

“You can’t compare our opposition. I’ve fought much better. The 135-pound division is wide open, so a win puts me back in the mix big-time.’’ 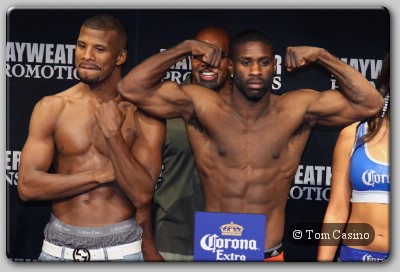 “I really hope he comes at me and tries to back me up. It’ll really be a good night if he does. But whatever he does, I’m ready and not overlooking him.

“One thing about Floyd Mayweather, he wants all of us on The Money Team to fight. So when the shot at a world title comes, we’ll be ready.’’

“I feel good about this fight, and I really want it. I know what it takes to be a world champion. I’m ready to let my hands go. I know I have to stay busy and dominate all the rounds in this fight.

“This win can take me to the next level.’’