“It feels good sparring someone of such a high caliber like Joe Joyce,” said Milton after training. “I came in second at the Olympic Trials, which gave me a ton of confidence. Now that I’m working with a fighter like Joe Joyce, I am learning a lot, and we are going hard rounds. Not a lot of fighters get this much experience prior to turning pro.”

Milton, a 25-year-old amateur stand-out from Tulsa, Oklahoma, who was a silver medalist at the Olympic Trials and won the Western Qualifiers in 2019, is ready to take his career to the next level.

“I made sacrifices last year, I moved to Oakland to train and get better,” stated Milton. “Now I am training in Las Vegas and I want to be the best I can be. I have to go where there’s world championship level sparring, it doesn’t get better than this. Helping Joe Joyce with his camp is just the start of many great things for me.”

Milton, who is fresh out of the amateurs, is more focused than ever on making a statement as a professional. His manager Mike Leanardì is thrilled with this opportunity.

“Milton has only been boxing for three years, but is able to give Joe Joyce quality work, which speaks to Milton’s attributes,” said Mike Leanardì, CEO of Victory Sports & Entertainment. “Milton is a person with strong character and a lot of integrity as well as talent. Learning from a decorated amateur and rising pro like Joe Joyce will only improve Jeremiah, and his quest to become a world champion.” 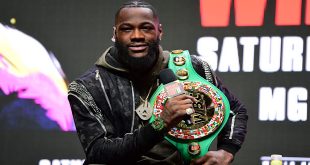