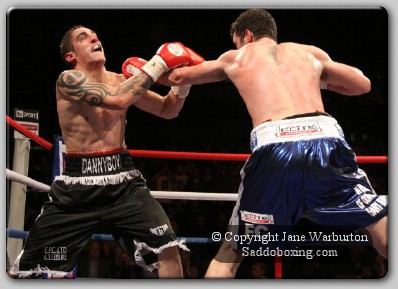 Last night at the Brentwood Leisure Centre in Essex, England, Hennessy Sports hosted a fightnight billed as 'Winner Takes It All'.

Headlining was to have been the vacant British Middleweight title clash between Darren Barker and 'Mad Dog' Wayne Elcock - but a late change of opponent saw Elcock replaced by Danny Butler of Bristol just a couple of days earlier.

Commonwealth Champion Barker kept a cool head against 'up for it' Butler, finally forcing the stoppage in round seven.

Barker improves to 21-0 (14) while Butler drops to 18-2 (3), just two weeks after losing a hard fought one point decision to English titlist Darren McDermott.

There was an upset on the card as super feather prospect Steve "Superbad" Barnes, 3-1 (1), had the first defeat on his record courtesy of Slough's Ian Bailey, 5-3 (0), via a 39-38 points decision after four rounds.

In another unexpected verdict, light middle hopeful Phill Fury, 3-1 (1), was held to a draw by unheralded Norwich man Louis Byrne, 1-10-1 (1), during a four rounder.