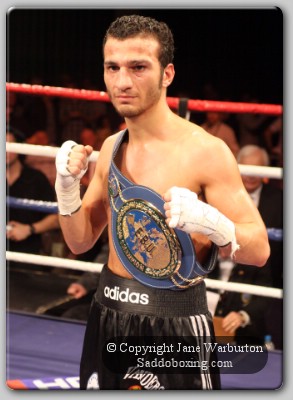 Both men get off to a busy start in this scheduled ten rounder which looked like it might be a thrilling contest as both men slug-it-out from the off. Outlaw Wale lands a right followed by a swinging left to the head of the Champion in the first minute of the second frame.

Lyon touches down as he overbalances, but Referee John Keane does not count it. Lyon's right eye is starting to swell and it’s a close match-up between these two!

But the drama is still to come – as in the third round, the contest is stopped when both men sustain bad cuts to the left brow area (deemed to be from a clash of heads). Rules state that as this occurred in less than four rounds – the contest is classed as a ‘Technical Draw’.

The main event of the evening was Stephen Foster junior’s first defence of the European Super Featherweight Title he won in October last year after ‘flooring’ Leva Kirokosyan in the third round.

It’s a good first round with both men using a variety of punches – particularly body shots. Foster looks confident but Fegatilli builds in confidence during the second round and aggressively digs in a number of body-punches. Foster puts pressure on the Belgian and the crowd begin to cheer.

Mid-way through the third – Foster has to cover up while Fegatilli unloads a barrage of shots with the Champion backed on the ropes. Fegatilli finishes the round strongly.

The Challenger is given time to recover in the closing minute of the fourth after what he gestured was ‘use of the head’ (!) He then drops his gumshield and has to retrieve it. Foster finishes strong. Foster lets the punches go in the fifth and has a good round.

The sixth is fairly even although Fegatilli finishes it more strongly, but by the seventh – Foster is less busy than Fegatilli, who starts to pick-it-up and pressures Foster in the corner.

Foster started the ninth off better, but with forty seconds of the round remaining – he goes down to one knee after a body-shot and has to take a count. Fighting resumes and Fegatilli throws numerous body-shots while Foster has to cover up. Another left to the body sends Foster to his knee mid-way through the tenth.

He overbalances (after a shot) and slips to the canvas in the last half minute of the same round and is forced to take another count. In the closing seconds he touches down again in the corner and takes yet another count as the bell signals the end of a disastrous round for Steve Foster junior.

He looks like he can barely keep upright in the eleventh and finally goes to a knee once more with a minute remaining. As he sits on his stool at the end of the eleventh, Maurice Cole looks like he may retire his man – but Foster junior is insistent that he is allowed to finish the fight.

Foster puts some distance between himself and the Challenger to get through the round and luckily for him – Fegatilli doesn’t throw much in the first half of this final round. Then Fegatilli releases a flurry of shots and Foster covers up - seeing it out to the final bell.

Afterward, Foster Junior admits that he had suffered with a virus earlier in the week.

It was a disastrous night for Leicester man Martin ‘Immaculate’ Concepcion, who was on the canvas twice in round two before being stopped.

Maher split his glove in the third round and had to get it replaced before continuing the contest. He went on to get the points win (40-36) and improves to 7 wins (2 by KO) while Walsh drops to 2 wins 14 losses (3 by KO) and 1 draw.

Perry faced late opponent - Bulgarian born Dontchev who threw very little in the first round but always raises a smile in the ring! A tidy performance by Perry who had Dontchev on the canvas at the end of the third round.