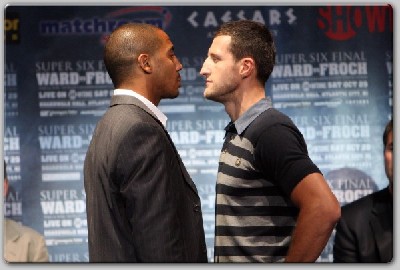 Ward and Froch, along with their respective promoters Dan Goossen and Eddie Hearn, Ken Hershman, Executive Vice President and General Manager, Showtime Sports and creator of the Super Six World Boxing Classic, Ken Condon from Caesars Atlantic City and Aaron Davis, Commissioner of the State Athletic Control Board, spoke with a crowded room of media from New York, New Jersey and national outlets at Highline Ballroom in Chelsea to discuss what is being called the most significant fight in the history of the Super Middleweight division.

The winner of the high stakes matchup will claim both world championship belts, the vacant The Ring magazine championship and the inaugural Super Six World Boxing Classic Cup.

Here’s what the fighters had to say on Tuesday:

“Thanks for coming out. I don't know if this tournament and The Final would be what it is if it didn't have the bumps in the road. Difficulties make you appreciate things. It's fortitude. Thanks to Ken Hershman. There were several times I thought it was over but then I get a call saying we're back on. Don't get frustrated by the journey; enjoy the ride.

“If Carl feels like he can't let go of his belt and I feel the same way about mine, it will be a tremendous night of boxing.

“I'm thankful for the opportunity; I've said that from day one that I'm not surprised to be here. I'm not dismayed. This press conference isn't too big for me. I'm ready -- but getting the opportunity to fight the best, that's what I needed.

“I love it. It's the promotion of big time boxing. Carl isn't the first person to say it and he won't be the last. I understand what it looks like on the outside. But it's a whole different thing inside the ring. Trust me, I'm hitting hard enough.

“I like to be a chameleon. Whatever Froch brings, I need to have an answer. I will do whatever has to be done to win.”

“Without Showtime, none of this would be happening. I defended my title, lost my title and then won it back with a masterful performance against Arthur Abraham, the best performance against him to that date and since. I have had some epic battles. That's why I'm in boxing.

“I'm here to defend my title and take away his. Andre Ward deserves the respect of a champion. Ward is a great fighter and great champion. But I have a job to do.

“There's no real beef or needle. There are high stakes. My WBC belt means a lot to me. I found that out when I lost it to Mikkel Kessler. We both mean business. We're not going to be about handshakes and hugs… maybe after the fight.

“I strongly believe if there is a knockout in the fight, it will be me knocking out Ward. I don't feel that he has the punching power. Even if he did, I can't be stopped. I've got the granite chain, I'm a beast. Laugh, if you will but it's true. I can't be knocked out.

“Every fight is different. The old cliché is that styles make fights. He is not like anyone specifically but I guess he is most like (Andre) Dirrell, an Olympic boxer. He likes to move, use his speed. But if anything, Dirrell is faster and I handled him.

“It's nice to fight at home. To be brought out of your comfort zone is a disadvantage. Since defeating Pascal, I've been all over the world. I've been to America, Denmark, Finland. So it makes no difference to me. But Ward is used to fighting in his backyard. This might just be a little chink in his armor.”

After a Ward-Froch stare down to kick off the presser...“I just had that same stare down with Goossen… I won,” Hershman joked.

“It's been a long journey over the past two years, culminating in the compelling matchup of the top guys, two young guys, hungry champions. I have the utmost respect for both.

“I thank Dan (Goossen) and Eddie (Hearn), who have been cooperative and worked together to make this possible. The Final will be a bit more theatrical and exciting - before the fight - than normal boxing. It will be a spectacular event.

“And of course, a big thanks to Andre and Carl. They have lived it and embraced it. The Final is bigger and better because of them.”

“For the tournament, I've heard all the good things said and they're all accurate. But what I want to say comes from the gut - we're striving for the growth of our sport. We have great fans who come out for all the big fights but I really have to thank Ken for putting this together.

“Coordinating the Super Six has been a chore. I know the hell you went through. To get six preeminent fighters to pre-agree to fight one another is something special. This is unlike any tournament in the sport. To get the best to fight and not have to worry about a loss hurting their career is an amazing accomplishment.

“Oct. 29, when we fight for the cup, it will revolutionize and modernize boxing. That's what we need to do. We need to be innovative. The traditionalists scoff. For example, the 24-second shot clock in basketball, the three-point line… but sports must evolve.

“Andre is on a path for greatness. That's what a fight with Froch does for his career, brings him one step closer to greatness.

“Andre is an exceptional person in and out of ring. His knowledge of sports and business is ahead of his time. Yesterday, he said to me, ‘Hey, I'm a 27-year-old going on 45.’ That shows me that he has an uncanny ability to know that it’s easy to get there but it's harder to stay. You'll see that when the bell rings, he won't take a step back. And after the final bell, you'll see what kind of gentleman he is.

“We're optimistic that we'll sell out the fight. Come Oct. 29, nothing will be uncomfortable for Andre Ward. His comfort zone is that ring.”

“It's been a long 24 hours. We came from our first press tour stop at our headquarters in London. I'm glad we're doing this press tour. A fight this magnitude deserves it.

“What Ken has done has thrown away all the questions and politics in boxing. We have the best fighting the best to reveal the ultimate champion.

“This is a huge fight for Britain. Carl is now Britain's No. 1 pound-for-pound fighter. He has nothing given to him. He travels and fights away from home on the regular. He said at breakfast that he is not letting go of his WBC belt. He has worked too hard for it.

"To defend his title, capture the WBA, Ring Magazine belts and the Super Six Cup would mean everything to a guy who has had to do everything on his own."