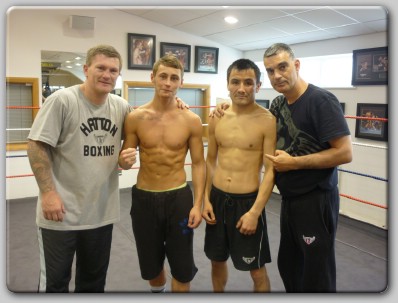 **With Slideshow and Full Audio Stream** 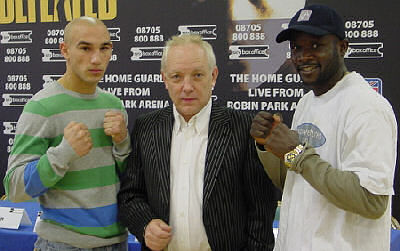 Yesterday in Wigan, England, promoters Frank Maloney and Steve Wood held a press conference for their "Home Guard" show this Saturday at the Wigan Arena, facing off the eight fighters that will clash in four title fights.

The British Light Middleweight title will be up for grabs when Gary Woolcombe meets southpaw Marcus Portman for Jamie Moore's old title. Woolcombe is continuing a comeback from the Andrew Facey loss while Portman comes into the bout as the reigning WBF titlist.

Commonwealth Welter Champ Ali Nuumbembe will look to retain his belt for the first time when he meets hot prospect Craig Watson from Manchester. The native Namibian stunned British Champion Kevin Anderson in February to win the Commonwealth but may have his hands full with the young southpaw Watson.

It'll be a battle extraordinaire when all action Chris Edwards clashes with the towering Jamie McDonnel for the vacant British Super Fly crown. McDonnel is the reigning English Bantamweight titlist and will be coming down in weight to meet the scrappy Edwards, the current English Flyweight beltholder.

"2 Smooth" Jason Booth gets a crack at the Commonwealth Bantam belt when he meets Wales' Matt Edmonds over a scheduled 12 rounds. Booth, a former IBO, British and Commonwealth Champ dropped a hard fought decision to Ian Napa for the British title earlier this year but is the favorite to school his younger opponent Edmonds.